What’s in a title? The Razer Blade Stealth laptop knows, that’s for sure – not only does the name scream sleek, but it’s a subtle nod to the key feature.

That isn’t to say the i7 processor or award-winning design aren’t key features. But this laptop’s ability to pack performance into a space-efficient package has made it a model to note. Buyer’s are taking notice, and so are review companies – this laptop is an example of ultra-portable done right.

But there are plenty of different laptops in this class – many of which boast similar features or comparable claims to greatness. For the price, and up against the competition, is the Razer Blade Stealth a model that buyers should consider? Or is this one worth passing on in hopes of finding a better deal? 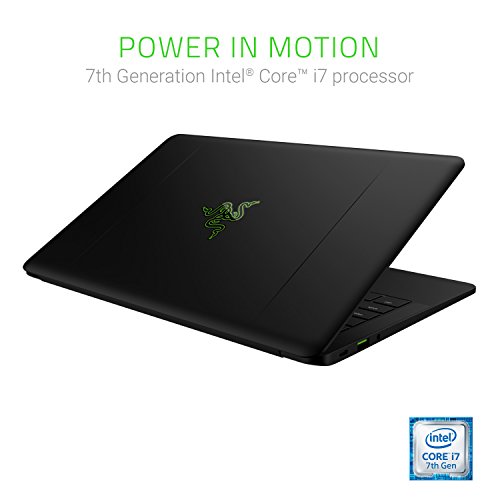 Here we’ll take a look at this machine – it’s specs, it’s design, and how the overall configuration contributes to the finished product. Is it robust enough for all necessary activities a user may engage in? Is it small enough to offer convenient transport and ease of use?

We’ll also take into account the value represented by this purchase. It could have plenty of top-quality parts and soaring reviews from the biggest names in the field. But for making an important buying decision, a shopper must know whether there are any competing models in the same price range that could take them further for the money.

What Does it Offer?

Razer Blade laptops have everything necessary to get a buyer’s attention. They have solid specs, a sleek-looking design, and a name that’s easy to remember.

But beyond that, Razer Blade laptops are made with efficiency in mind. Sharp in both looks and performance, they’re built to take buyers further in terms of everything from processing power to battery life. Their components are one thing, but the added benefit of redefining portability is their real claim to fame.

The stealth combines this mind for space with a real appreciation for solid specifications. The 13.3” ultrabook comes in gunmetal and black, each sporting a unique Razer logo with tone-on-tone color design. It’s stylish right down to the finest detail, and incredibly compact.

A computer built for mobility may not always offer a lot in the areas of speed or responsiveness. Some people who buy similar products view this as a necessary tradeoff. After all, it’s not exactly easy to take the high-end processors that power super-fast PCs and put them in a laptop. But Intel did alright with this one – and many others in the Razer Blade lineup.

Not only does it offer a great list of components, but it’s been tested and positively review by many within the PC and laptop community. Let’s take a look at the specs first and see how each one plays a role in the computer’s performance.

What Specs Does the Razer Blade Stealth Offer?

Specs are the bulk of any computer’s worth. While it could be argued that even the aesthetic design is a specification in itself, we’re talking about the core components that help the machine function. It’s the laptop shopper’s equivalent of looking under the hood, and striving to see just what they can expect in this purchase.

Here’s a look at a few of the Razer Blade Stealth’s main parts and what a user can expect from each one:

This one is new – this laptop used to come with an i7-7500U, which was a staple among many Razer Blade models. The catch? That was just a seventh-generation model. It’s good, but the 8550U offers that eight-generation architecture and a base speed of 1.8GHz. With 8MB SmartCache and the option to reach 4.0GHz speeds with Max Turbo Frequency, this is all the processing power most people will ever need.

It’s fair to say the biggest change that’s going unnoticed in technology is the RAM trend. As users focus on CPUs, GPUs, and USDs when making their choice, programs are quietly raising their RAM requirements. Soon the 4-6GB recommendation will be obsolete, and most devices will be recommended to have 8. Luckily with this model, you get 16.

Even better, the setup is dual-channel. This style of RAM slotting is aimed to reduce bottlenecking, helping you get the most from each part of your system while balancing the load between each evenly. Your hardware, and the computer’s performance, will thank you.

It is possible you could upgrade to a 512GB SSD, or upgrade even higher to a 1GB SSD. But the standard version equips you with an SSD that has solid storage space for your OS, core programs, and more. The SSD is made to match this machine – it’s sleek and spacious, meaning you won’t get a ton of storage space from it, but it’s also fast.

Combine that speed and functionality with the possibility of external storage, and this checks all the boxes. External drives and cards can be used to give you a few more gigs of space when you need it. This could be a little more cumbersome, but it also keeps the price down. Plus, since this machine won’t take up too much space in your bag, it’s easier to bring along some extra storage.

These are the core components of this machine, and while we could go on about the chipset, style of materials, and more, we want to discuss all major areas. So rather than discussing all components, let’s review some of this device’s unique points.

What Makes This Product Unique?

There are several things about the Razer Blade Stealth that make it a unique choice for its class. While a person may expect certain features, such as touchscreen functionality at this level, there are also some lesser-known conveniences.

One of these deals with the programmable nature of the keyboard. This is a big part of the appeal for many ultralight laptops. This one is capable of over 100 colors and the backlit keys can be programmed in a variety of ways. Rather than locking a user down to one color scheme or style of illumination, this model provides some options. For those whose moods and preferences for their gear tend to change, this is a nice feature to have.

This color selection comes thanks to the trademark Razer Chroma functionality, which isn’t the only careful touch given to this machine. While it’s only around the three-pound mark, it can provide about 10 hours of battery life for a single charge. That’s a day’s work (or play, for the hobbyists) and means you can use your machine without having to hover near a wall outlet.

There’s also a pair of SuperSpeed USB 3.0 ports, a 720p camera, built-in stereo speakers, and a 16:9 aspect ratio. Collectively, that’s a solid package. And while aside from the trademark color tech it isn’t anything too unexpected for this class, it’s still a solid model that can be found for right around the low-one-thousand price range by shoppers with a good eye for deals, or for about $1,300 on the company’s site.

This computer is often listed as one of the top options in the ultraportable category for good reason – it is designed with the intention of putting power in a small package. But how does it hold up for a laptop in its price range?

A big part of the price comes from the processor, and the fact that you’re using an SSD no matter the configuration you choose. It’s also important to note how important the lit keyboard and Chroma technology are to the design. Because they’re such a big part of the computer, they contribute a lot to the cost.

As a model in the high-end price tier for its list price, this model’s cost is one of its downfalls. But it has gotten a good reputation, with PC Mag calling it 2017’s best model and saying it offered unmatchable value for its tier at the time.

It got TechSpot’s equivalent award, and has received a number of positive reviews from previous buyers. But while it has a lot going for it, technology moves quick. How does this laptop hold up to the competition? Is there another model in the same price range that outranks it?

How Does the Razer Blade Stealth Stack Up to Competition?

There are plenty of great laptops available in the ultraportable category. If you’re going for a model in this price range, you may have heard of some of the more popular models – let’s start with arguably the most popular one.

Microsoft’s 13.5” Surface Laptop has that super thin design that makes users take note. And while it does come in at just over half the price, it has an i5 instead of an i7 and only a quarter of the RAM. It’s still got the backlit keyboard, though, as well as a number of positive reviews.

How about another top model from a well-known brand? This one is as much the Surface’s competitor as it is the Stealth’s. The MacBook Air is a popular choice for content creators, professionals, and casual users alike.

Like the Surface, it has an i5 and even fails to reach the clock speed of the Stealth’s when in Turbo mode. It does come with a 128GB SSD and 8GB of RAM. At only around $1,000, and from a titan of technology like Apple, this one is another popular competitor to consider.

But how do they stack up overall? Some of the higher end versions of these laptops would cost a lot more than the Stealth. So, in that regard, the Stealth is a solid entry into the “great” category even if it isn’t great itself. For high-end laptops, it’s decent. But it has a higher price, another brand with similar features could be just as efficient but offer a little more quality.

It depends on how a person feels about the Razer Blade line. Though they may not have the consumer confidence of, say, Apple or Microsoft, they’re a highly revered company in their own right. The Stealth may not be the best possible option unless you’re committed to these specific specs, but it’s a very powerful ultraportable laptop by any standard.

Our Verdict: Is the Razer Blade Stealth Worth It?

Sleek looks? Check – whether you go for gunmetal gray or black. Don’t forget the beautiful backlit keyboard, programmable to your specifications. Performance? Check – the jump to an eighth-generation i7 was a risk, but it offered a lot more responsiveness. 16GB of RAM helps, too.

The only real area where one could say this laptop struggles with is its battery life. Ten hours is good, but, for computers, in this price range it is easy to expect more. That’s likely the main struggle for this laptop. It’s above what a person would expect for a similar computer from a bigger company like Windows or Mac.

But the difference here is the processor. While the improvement did increase the price substantially, it also offered a lot more in the way of performance. If you don’t mind shelling out more for a computer that’s priced for the higher-end category except for those moments when you find a great sale, go with the Stealth.

On many sites, the Stealth is often paired up with big discounts. This enables you to get software and accessories free with your purchase, which just adds to the value and gives you an even more well-rounded product.

The Stealth has the appearance and the components to satisfy any buyer in the ultraportable market. It’s a bit pricier than some of its competitors, but it offers a unique look and high-end set of specs to make up for it.