Wireless signals suffer sometimes in various parts of your house, and you’re pretty sure it’s just normal. You deal with it and know if you go to that corner of your home, you’re just not going to have a good signal. What is that didn’t have to be the way of things anymore? It’s true. Signal degradation happens due to the constructs of your home, but it is now possible to reduce the interference that causes the signal to go weak. Having a solid signal all over your home may feel like an intangible dream, but wireless mesh makes it possible with today’s technology. It even works in larger homes near flawlessly. You may be wondering, though, what exactly is wireless mesh?

Every now and again there are huge strides forward in technology, and the most recent one is wireless mesh networking. It’s more than just routers with a spin. The technology actually improves the wireless signal available in your very own house. Imagine a net and the way the fibers criss-cross to cover something. Wireless mesh works the same way by casting a virtual netting over your entire house. These wireless mesh networks are also extremely simple to configure compared to more traditional router setups. Once you finish setting them up, they’re ready to continue on their own without any intervention from you. Mesh networks effectively solve one of the more significant problems that have been around for a while concerning wireless networks. That problem has been to provide coverage to areas that do not have good signals. The dead places that you come across or that wireless signal that seems to fade in and out can be fixed and improved by using wireless mesh networking.

Wireless mesh networks have several bases also referred to as nodes, beacons, or units. Each of these bases extends the overall size of the network. They all exchange data regularly between nodes and are all equally aware of any other nodes on the network. One of the biggest differences between traditional router networks and wireless mesh networks is the way data moves across them. Traditional router networks transmit data while wireless mesh networks move data. The difference in functionality creates a higher throughput compared to conventional networks. Mesh routers and nodes also have a different number of bands – some are single, duel, or tri-band by design. Having more bands means more improved functionality. The number of bands that Eero has, three, allows for better data carry without resulting in a congested channel.

This is such a new technology for consumers that there is a lot to think about in terms of wireless mesh. One of the more significant considerations needs to be about the way the different mesh networks communicate with each other. Each manufacturer has a separate proprietary protocol that the different nodes communicate with on the mesh network. The reason for this is because there is no set standard unlike the pre-existing 802.11n that most network connection uses. To illustrate what is happening, you can’t take an Orbi and mix it into a mesh network comprised of Eero beacons. It’s very different from current tech because you can mix brands and they’ll all communicate with each other. Belkin, D-Link, and all the others out there follow the same industry standard in their traditional wireless connections.

There’s a deeper meaning to this, specifically that whatever system you buy, you’re stuck with that system unless you want to invest in something else altogether. Being restricted to a single device family can cause problems in the future because if any company were to go under, you’re going to be without support. Think about that for a minute. That means tech support won’t exist and warranties would not be
available if a company isn’t there anymore. Security flaws would be waiting to be exploited because no one would be there to ensure updates arrived promptly. You need to take the time to think about whether or not you’re okay with the possibility of losing the future assistance if any of these companies ever disappeared. It’s a real possibility because so many of the companies turning out mesh technology are startups and it’s common for startups to not last for a long time.

Established companies like Netgear and Google, though, probably have a longer lifespan, but at the same time, if they’re not selling the product well enough, they’ll remove them from the shelves, too. 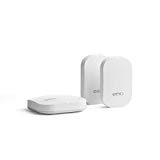 Eero is a startup and revolutionary in consumer mesh tech. Their mesh tech is in the second generation of their product. The router and nodes contain a tri-band mesh system. One band is solely for communication between the different nodes. The dedicated band keeps the nodes talking to each other without congesting the other bands to improve overall throughput. The beacons are small, nice to look at, and have a polished, low-profile size. If you’re into minimalism, this would fit in well with the rest of your home. With Eero, you get extensive coverage across your home with at least two beacons. You can add more beacons if you want to and they will all connect seamlessly. Eero also ensures a fantastical efficient network because of the way the bands are configured. Coverage is exceptional across larger distances, too. Even adding a new beacon is easy. Your app will send you a notification once you plug it in, and then you update it if it tells you it needs an update. 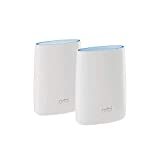 You might not be crazy about the way Orbi looks, though, because it isn’t the best looking piece of equipment out there. Plus, they’re really big comparatively speaking, and you won’t be able to tuck it away into some unobtrusive corner somewhere. From another perspective, Orbi is manufactured by Netgear, which is an established company that likely isn’t going anywhere in the near future. This has the potential to be a significant benefit over competitors because you know they’ll probably be around for a long time to come. It is a tri-band system with one of the bands dedicated to the unit communication so as not to cause congestion in the rest of the network. It’s the core reason why this mesh system works so effectively. Another option that is offered by Orbi is an outdoor satellite that makes it possible to extend your internet coverage outside. This is a fantastic offering that parks and outdoor events could absolutely take advantage of. On the downside, the Orbi is expensive, and the three-pack runs around $ with extra satellite units that are around $ each.

The Pros and Cons Eero and Orbi

Now that you’ve had the chance to get to know a little more about the Eero and the Orbi mesh networks, here’s a quick breakdown into the pros of each one.

Pros and Cons of Eero

Pros and Cons of Orbi

Which One Should You Buy?

Knowing which one to buy between the Eero vs Orbi is going to be dependent on the end user. If you want more options along with excellent connectivity, then the Orbi is the way to go. Orbi is also less expensive than the Eero, and it comes with three units including the router compared to the Eero that only comes with two.

If you’re not as technically savvy and you want something that is easy to set up, then the Eero needs to be the choice for you, even if it does cost a bit more. Consider the longevity of the company, too, and decide whether or not that makes a difference to you for long-term purposes. Whichever one you choose, though, you’ll know that your connectivity will consistently deliver fantastic speeds.