Acer and Samsung offered the first Chromebooks ever made in 2011, but, when HP introduced its Chromebook 14 in 2013, you could tell it was better made than many of the more cheaply priced competitors. First generations of Chromebooks came with anemic specs and squinty 11-inch displays, which has led to a stigma that has been difficult to dispell.

The one exception, wouldn’t you know it, was Google’s own elegantly designed Chromebook Pixel, which cost as much as a full-grown laptop. The epic price tag at the time of its release rather defeated the point of making a lightweight, ultra-mobile device that was affordable and boasted the lightning-fast Google Chrome browser.

But, when the HP Chromebook 14 came out in 2013, it offered a quality, affordable alternative with a 14-inch display. Plus, HP thoughtfully added a splash of color (festive colors like peach/coral, snow white, and turquoise) to their Chromebook to help break up the dreary hum-drum of the black and grey laptop currently on the market.

The 2018 HP Chromebook Specs and Review

Flash-forward to 2018, and HP is still churning out the Chromebook hits. According to ign, HP and Google have had a lucrative Chromebook arrangement since 2013, with options that now range from budget-friendly items to high-end two-in-one models.

This review, though, will focus on the HP Chromebook 11. The 2018 HP Chromebook laptop comes on the heels of a wildly popular 2017 version that earned an Amazon Choice Award and featured a beefy Intel Celeron N3060 1.60 GHz processor, 11.6″ display with LED Backlight, 4GB LPDDR3 SDRAM, and a sizable 16GB eMMC HHD, as well as a lengthy 12.75 hours of battery life.

Priced at around $200 to $230, it is one of the most well-equipped Chromebooks out there, demonstrating that, yes, Virginia, there is a PC with long battery life. Thanks to affordable, beefy Chromebooks like the HP Chromebook, the stigma of “flimsy, underpowered wannabe laptops” is now beginning to lift, and, in 2018, it is estimated that there are over 25 million Chrome OS users worldwide.

And the HP Chromebook, along with a few of its competitors, the Acer Chromebook Spin 15 and the Samsung Chromebook Plus V2, are showing the world what a really good laptop with nothing but a Google storefront is made of. The Hp Chromebook 11, for instance, offers the following set of features:

What a Chromebook is and What It is Not

With a slimmer form factor, rubber edges around the corners, and rubber feet, there are just enough thoughtful additions to justify the price jump. Plus, new features are being added all of the time, like tablet mode for Chrome OS, SD card compatibility, and better stylus support.

All in all the HP Chromebook 11 is a lightning-fast web browser with a few other neat tricks up its sleeve. However, it is not a gaming machine and it will not meet your media editing needs. But, it is a great typing and editing laptop, and its epic battery life makes it great for video streaming services, listening to audio, or looking at digital photos.

Moreover, the HP Chromebook 11 features a large, responsive touchpad, island-style keys that don’t rattle when you click them (typical of cheap keyboards), and two USB 3.0 ports. Plus, you will get 802.11a/b/g/n Wi-Fi and Bluetooth, and there is also an HDMI port for attaching an external display, as well as dual speakers, a headphone jack, and an HD webcam.

Also, the HP Chromebook 11 runs the most updated version of Chrome OS. Updates, when needed, run in the background, with the user prompted to restart the laptop on occasion. Google Play Store is also included, and you can install any Android app that you find there, although one reviewer mentioned that they don’t all run properly.

The HP Chromebook 11’s housing seems to be made of hard, durable plastic, and the laptop is mostly silvery grey when closed. Inside, polished silver surrounds the keyboard and touchpad. There is a decent array of expansion ports on the HP Chromebook 11, as mentioned, though there is the rather glaring exception of no USB-C connections.

The rubber feet on the underside do a really good job of not allowing the machine from sliding around while typing, and they also lift the laptop up and allow sound from the speakers to come out crisp and clear, though not overly loud.

The Two Flavors of Chromebooks 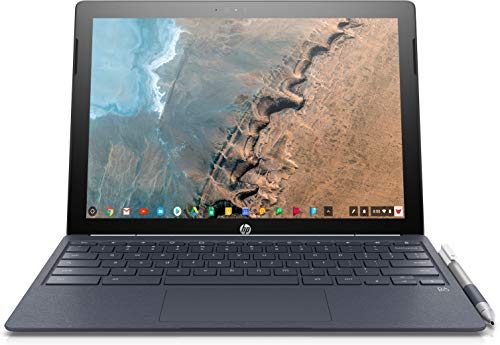 According to cnet, “Chromebooks seem to come in two flavors: kids and grown-ups.” We are told that the Acer Chromebook Tab 10, for instance, is one for the kids, while HP’s new 12.3-inch Chromebook x2 clearly for the adults in the room. Hardly a Chromebook at all, the beefy all-in-one HP will go for around $767. That price does include a razor-sharp HD display and the HP Active Pen (with Wacom AES technology). Hoping to give the Chromebook Pro some healthy competition, it is rumored to even attempt to content with the mighty 12.9-inch Apple iPad Pro. And, while it may not quite match the firepower of the iconic Mac, HP is more affordable and features the Android app universe as well as a long-ish battery life and simplicity of use.

It also makes streaming videos a breeze, and unlike many detachable devices, the laptop can function as a clamshell just as well as a tablet. HP also thoughtfully added a thin metal layer inside the keyboard to lend rigidity and make it feel more laptop-like in your lap. Its large hinge also makes for easier single-handed operation.

Moreover, the metal unibody construction and ceramic white coating also give it a sleek new look. But it is not all ponies and rainbows: As one review reminds us, the HP Chromebook 14 is by no means a performance powerhouse, although It does include a nice keyboard and trackpad. Chrome OS is quick and agile, and it comes with a sharp HD screen. However, it is not as powerful as many out there, and the battery life is just above average. Plus, we also agree that the SSD could be bigger.

HP Chromebook: Not as Big and Bad as Its Competitors

There are several competitors for the crown of best Chromebook on the market in 2018, and we have already mentioned a few of them, but let’s take a closer look at the playing field. Google, despite its current reign of internet everything, occasionally likes to flex its muscle in the hardware field as well and has already offered some elegant if not pricy, eye-catching options to that point.

The original Google Chromebook entered the market in 2013 and other elite hardware specimens include Google Pixel, the Google Pixelbook, and Google Glass. The Pixel Phone was also introduced in 2013 and it was a top-notch smartphone that boasted unlimited Cloud storage and a razor-sharp 1080×1920 HD 5.5” display.

Back to the similarly named Pixel Chromebook, though, which followed Google’s notorious high introductory pricing scheme. This laptop was just a little too expensive for what people were willing to pay for in a Chromebook.

Despite that, though, it reportedly offered the highest pixel density of any laptop (a blistering 239 PPI), an ultra-peppy Intel Core i5 processor, a 32 GB SSD, and a colored lightbar on the lid for that ubiquitous Google cool factor. Plus, it could do something the others could not: it could be updated to an LTE plan.

Another competitor, the Asus Chromebook C200, offers 4GB of system memory, a 16GB SSD, and has a slighter better battery life and processor. The Samsung Chromebook 2 offers the same memory, a better processor, and has a 13.3in high-res display; but costs twice as much.

Though all Chromebooks have their pluses and minuses, when compared just processor-wise, you can clearly see that the HP Chromebook is barely treading water. For instance, when compared to the 1.7GHz Samsung Exynos 5 Dual 5250 processor and the Asus Chromebook C200’s 2.4GHz Bay Trail Celeron processor.

So what makes the HP Chromebook a good product? Well, a large part of it comes down to design and some of the thoughtful additions included with this laptop. Number one, it is elegant, with the look and feel of high-quality materials.

At a little over two pounds, it is lightweight, thin, and easily portable. The curved polycarbonate frame looks sleek and sexy, and its rubberized edges make it feel rugged and durable. The lid, as well, doesn’t feel flimsy, but it offers enough to give to prevent the display from easily cracking. The outsized hinge also operates smoothly and feels durable, while thick, rubber feet offer stability while setting the laptop on smooth surfaces.

The keyboard feels almost weighted and offers a smooth, muffled clicking sound when pressed, similar to that of a Macbook. The keyboard, too, is thoughtfully designed, and it stretches most of the width of the laptop, offering flat, large, keys that are well-spaced and not crammed together.

The touchpad also seems unusually wide for its size, and it offers a lightly textured surface that is responsive and accurate, making surfing and installing apps fun and easy to execute. Ergonomically speaking, the laptop feels substantial and nice to hold on to an manipulate, and you never feel you are going to drop it thanks to thoughtfully included rubberized additions to the frame.

The Hp Chromebook 11’s most attractive feature, though, must be its screen. The 1,366 x 768 resolution is nothing to write home about on its own, but when it is stuffed into an 11.6-in frame, it translates into a pretty great canvas for consuming streaming media.

Plus, the fact that it is an IPS panel is something you just don’t find at the price point, and the screen’s brightness rivals even the mighty Pixel. With rich, vibrant colors and a wide viewing angle, at around $125 to $155, the HP Chromebook is the best of the best.

It is not the fastest, nor is it a heavy-hitter, and it may bog down when given multiple tasks, but the HP Chromebook 11 has a lot going for it. The display, trackpad, ergonomics, weighted keyboard, and portability place it in a class of Chromebooks well above its price. Great for word processing, light office work, and streaming movies, HP makes good on its promise to bring mid-range technology to the masses at rock-bottom prices.

Plus, the HP Chromebook feels every bit as nice as those that are available from $500-1000, and the display may actually even rival some of them. Although we would love to see a 2.5 GHz processor and more storage, we would be more than happy to own an HP Chromebook 11 at the price point of $200 to $230, and, we are betting, so would you.