Wi-Fi routers are an indispensable part of any modern home, as they enable you to easily establish a wireless network. This makes using your devices more enjoyable as you don’t have to connect directly to your modem every time you want to access the internet.

But, not all Wi-Fi routers are created equally. Some enable faster connection speeds and more consistent coverage while also offering a buffet of features that many modern users will appreciate.

In this article, we give a brief overview of the Orbi, discussing its benefits and drawbacks. Then, we compare it to similar products on the market, offering our final thoughts on why the Orbi is the best Wi-Fi router.

An Overview of the Orbi Wi-Fi Router 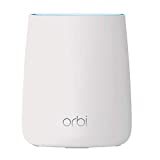 Customers can purchase the Orbi Wi-Fi router on Amazon for $249.74.

This Wi-Fi router offers 2000 square feet of coverage and uses tri-band technology. This means that three bands are available for communicating data over the wireless network.

This router connects to your modem, though Orbi also sells a model that is a dual router-modem. This model can be purchased on Amazon for $249.74.

In a sense, each Orbi satellite acts as a traditional Wi-Fi extender, enhancing the coverage in a certain part of our network.

Orbi offers many packages that include routers and various satellites, allowing users to expand and enhance their coverage as much as they want.

Each Orbi Wi-Fi router comes with 4 ethernet ports as well as parental control settings for monitoring how the network is used.

The Benefits of the Tri-Band Technology

The other notable feature of the Orbi router is the three bands it offers for data transmission. Many Wi-Fi routers on the market only offer dual-band coverage. Since one of these two bands is used for communicating with devices and other nodes in the network, the other band must primarily support users. This can lead to it getting crowded, like traffic on a highway. This results in a slower and more inefficient network.

This happens frequently with larger families that use a lot of bandwidth overall. Additionally, sometimes only one or two users can use such high bandwidth that they clog up the sole band on a dual-band system. This happens often during streaming and gaming.

In these instances, a third band is ideal in order to free up the flow of data. This allows the entire network to run smoother and more efficiently, resulting in sharper images, faster speeds, and a more immersive experience of your network.

This means that more devices can use the network without slowing down your connection, making tri-band technology ideal for technology buffs that use many devices over the course of a day. Alternatively, any large household or business would benefit from having three bands devoted to network communication.

When it comes to a building a wireless network, it’s best to always err on the side of caution, providing more coverage than you actually need.  You never know how you’re going to use the network, and you want to stay as flexible as possible for unexpected future changes. Maybe you take up gaming while you wait for your daily vlog to upload, meaning you suddenly require a much higher throughput.

Orbi is one of the best Wi-Fi routers because it supports this flexibility. Its tri-band technology makes it super-efficient when multiple devices are used, which is common in today’s cutting-edge world.

The Benefits of the Design

Many users forget that the router they purchase can be counted as a significant piece of art that is displayed in their home.

Thus, the simple, elegant, white Orbi appeals to many minimalist users who want an unassuming router that does not detract attention from other parts of their home.

When purchased separately, the Orbi router only weighs two pounds and is less than 7 inches tall. When purchased with other satellites, the router can be as tall as 9 inches. The satellites, however, can be as small as 7 inches and some of them can be plugged in directly to the wall outlet.

Orbi is one of the best Wi-Fi routers because it doesn’t negatively contribute to the aesthetic of a room.

Many routers and Wi-Fi extenders look like alien gadgets, featuring tons of antennae and dangling parts. These awkward eyesores attract your eye every time you enter the room, which can be detrimental to productivity, especially if the device is in your office.

With Orbi, you don’t have to worry about this loss of productivity. Orbi blends perfectly with white walls and will rarely be consciously acknowledged after you initially install it.

Also, since it’s so efficient at communicating with the other satellites, you will rarely experience network imperfections, which means you can think about Orbi even less. Less thinking about Orbi translates to less looking at Orbi, and vice versa. This leads to more time spent enjoying your devices and being productive using them.

The Benefits of the Orbi Wi-Fi Router

The Drawbacks of the Orbi Wi-Fi Router

How does the Orbi Wi-Fi Router Compare to Competitor Products?

Our Final Thoughts on the Best WiFi Routers

We think the best Wi-Fi routers not only facilitate fast connection speeds and a secure network but also take advantage of cutting-edge technology.

Orbi satisfies this bill most notably because of its tri-band, wireless mesh system which is unique in the industry. We think wireless mesh systems are the future of wireless networks. Anyone wanting to adopt this approach to networking would benefit immensely from purchasing Orbi.

We also love that Orbi is so simple and unassuming, both in appearance and in its installation. Many customers have noted that they were able to get their network up and running in under 15 minutes, which is unprecedented considering the complicated installations that some past routers have required. These inferior devices can leave you wishing you didn’t even have a router.

You will never feel this way about Orbi. Users can use a simple smartphone application or online software to install a router or additional satellites.

The Future of Wi-Fi Routers

We think the best Wi-Fi routers of the future will function in a significantly different way than they do now. We think they will become portable, allowing users to create a local network wherever they go.

Alternatively, we think routers might become obsolete in the future, as every user connects directly to source energy. There will be no need to build local networks when all connections are both wireless and direct.

Of course, this is dependent on whether the internet even exists in the future in the same form that it does now. If the internet significantly changes, perhaps future routers will also change.

Regardless, we think the future is going to be truly unimaginable. We think wireless mesh systems are just one step in this direction, as companies realize that building a network is truly a work of art. As this approach is developed in the future, customers will have more control over their technological experiences than ever before.