This particular series of Asus is a relatively low-cost ten inch windows 8 tablet that functions as laptop as well as tablet due to its features of keyboard segment. It is not the only first affordable hybrid of windows 8 that this manufacturer has made, there’s also VivoTab Smart ME400 from the same manufacturer, but, this one is regarded by many as more superior due to its overall good performance and the laptop style hinge which is practical in its design. 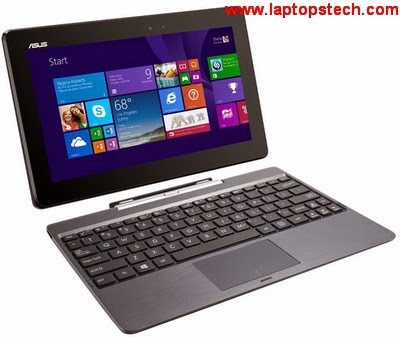 It features these following specifications: Intel Atom Z3740 CPU as processors, awesome two gigabyte RAM, storage of 64 gigabyte, 10.1-inch 1,366 x 768 pixel screen resolution and Windows 8.1 as the operating system. The design is very unique and appealing, it has hinge similar to the one we can find in laptop. This laptop is not designed of metal primarily, but some aspects are used to the inner workings of the hinge to ensure its strength and durability, but the overall material is largely plastic. Impressive array of finishing is also one of the juicy aspects from the design, the back part of the tablet is glossy gleamed, and the keyboard is made from brushed metal, while the bottom of its bit is created from a matt plastic.

In terms of practicality, the laptop’s design is totally suitable for a relatively cheap laptop-tablet hybrid. The weight of each of the tablet-part and the module of the keyboard are around 550 grams and the thickness is about 11-12 mm. If their parts are separated, none of them is remarkable as they are very thin and light, but when they team up, they made great, excellent team. But that’s quite enough about the design; let’s move on to the performance features. So this series uses a much faster 1.3 Gigahertz CPU in comparison than the clover trail ones. It is equally capable when being competed with the last generation processors of Intel Core i3. When seen in the laptop aspect, the level of power is okay, but in terms of tablet, it is really quite a powerful feat. 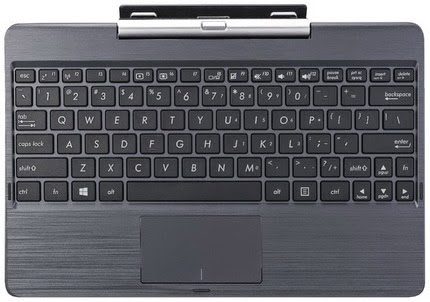 In more practical aspects, though, this hybrid is perfect for everyday usage, since it doesn’t get affected or suffer from the slowness of other kinds of tablet and can multitask just fine. However, this is not specifically designed for a performance machine because even though the RAM is quite awesome, it only has two gigabyte space, which is insufficient for a lot of serious multitasking processes. By default, T100 comes with Microsoft Office edition for Home and Student uses installed in the first place, which is usually not included in other tablet. Moving on the battery department, the T100’s keyboard doesn’t have the battery of its own to support the tablet’s stamina, unlike any other Transformer book series. So the charging process is done on the tablet’s micro USB port, which means you don’t have to worry about confusing or losing specific cable charge.

The manufacturer says that the battery is capable of lasting for eleven hours, but in actuality, it surpasses beyond expectation as it can actually run for twelve hours full. This kind of stamina is excellent and still second to none to any tablet, particularly more impressive since it is powered by Windows. Also the reason why it is considered superior than any other laptop manufactured by Windows, is because in aspects of battery endurance and swiftness processing, it is just truly outstanding and reasonably impressive.

All in all, the cons regarding this particular series is minimal to none at times and the pros are ranged a lot from design, features, performance, and other additions. Its excellent value, flexible design and long lasting battery life is more than any laptop-tablet hybrid could ask for. It is very powerful and excellent and with only little flaws every now and then, which won’t affect much of the satisfaction you will get from using this hybrid. It is totally recommended for those who are looking for a powerful, impressive hybrid with slightly more affordable price. It is truly worth your bucks for.