Many customers compare the pros and cons of different laptops when trying to decide which one to purchase.

This technique can provide a more objective basis for purchasing, as both the benefits and drawbacks of the laptop are emphasized.

Additionally, this method helps customers get a sense for how one product matches up with another similar product.  This is important since many laptops are so similar to each other when taking basic specifications into account, yet so different when they are actually used.

An Overview of the Dell XPS 13 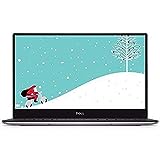 The Dell XPS 13 laptop has a 13.3-inch touchscreen and can be transformed into a tablet.

This laptop starts at $799.99 and is available in a silver color.

That price reflects the XPS 13 model that uses a 7th generation Intel i3 processor, has 4GB of RAM memory, and has a 128GB hard drive. However, the Dell XPS 13 laptop is also available up to the 8th generation of the Intel i7 processor.

An Overview of the MacBook Pro

The MacBook Pro from Apple is available in either a 13-inch or 15-inch variety. These models range in price from $1299 to $1999 depending on the screen size, the processor, and the features of the laptop.

The MacBook Pro allows customers to purchase it with a Touch Bar, which is a recent technology Apple has introduced into its computers.

When considering the Dell XPS 13 vs MacBook Pro from Apple, perhaps the most important element is the screen that customers will be using.

The Pros of the Dell XPS 13 Touchscreen

The Pros of the MacBook Pro’s Touch Bar

The Cons of the MacBook Pro’s Touch Bar

The Pros of the Dell XPS 13’s Bezel

Design of the Dell XPS 13 vs. MacBook Pro

Of course, design is completely subjective. One person may love a particular design, while another will hate it. However, if you try to look it at objectively, both of these laptops are at the top of the design game.

The MacBook design has truly become iconic over the years. Of course, it's been improved, but the original design is ultimately the design -- an aluminum unibody. People tend not to complain about the MacBook design.

On the flip side, the Dell XPS 13 is nowhere near the MacBook when it comes to design. It has its own style and its 2019 version is ultimately the best, as it has new color options and a bright, white interior. They have moved the webcam to the top, but the design has ultimately stayed the same.

The XPS 13 is most definitely a trimmer laptop, and what really sets it apart are the color scheme options or the black carbon-fiber texture on the palm rests.

The Weight of the Dell XPS 13 Vs MacBook Pro

The Dell XPS 13 is an overall lighter computer when compared with the 13-inch and 15-inch models of the MacBook Pro.

These models of the MacBook Pro weigh 3 and 4 pounds respectively.

The XPS 13, on the other hand, only comes in a 13.3-inch screen variety, and the weight of these laptops vary based on whether this is a touchscreen or non-touchscreen.

Both laptops are considered extremely light and portable, and most customers will not notice the difference of a pound. This weight difference might be more noticeable when considering the tablet functionality, though this is only available on the Dell XPS 13.

In this sense, it’s critical that the Dell XPS 13 be extremely light weight since tablets are often used so interactively by all age ranges. Traditional laptops, on the other hand, typically sit on your desk or another hard surface, which mitigates the burden of their weight.

The Operating System of the Dell XPS 13 Vs MacBook Pro

Of course, there are certain differences that distinguish operating systems. But, with the exception of certain models, if you purchase a modern laptop, you can expect to receive a device with an efficient operating system with many features.

These customers cite Apple as the paragon of excellence in the industry when it comes to keeping as much of the manufacturing process in house as possible. Of course, most laptops feature chips and cards made by other companies.  Yet, it can be argued that software is much more sensitive to being made by third parties.

Thus, when considering the Dell XPS 13 vs the MacBook Pro, keep in mind that the MacBook Pro had its hardware and software designed and created by the same team, more or less. This approach means that all the features work seamlessly together, and that each experience with the device is stimulating and fully immersive.

Both computers feature advanced ways that users can log in, which maximizes the security of the device. The MacBook Pro features its prominent Touch ID sensor on the upper right corner of the Touch Bar. Most users claim that this feature is relatively intuitive to use, though some errors can result.

The Dell XPS 13 outdoes the MacBook Pro when it comes to security measures, as the Dell laptops not only feature a fingerprint sensor but also facial recognition technology. This technology uses the webcam on the The Dell XPS 13 is an overall lighter computer when compared with the 13-inch and 15-inch models of the MacBook Pro.

Dell XPS 13 to sense the face of the user, allowing the user to unlock the computer.

While these features are certainly effective on both of these devices, this is still relatively new technology. Companies seem unclear how they want to allow customers to unlock their products. Simply offering more ways to unlock the product might not be ideal, as these options can be overwhelming and can take energy away from the larger experience.

The Battery Life on the Dell XPS 13 Vs MacBook Pro

Battery life estimates for laptop models are difficult to trust for two reasons.

First, they are usually calculated with one kind of usage in mind, yet the battery life varies depending on usage. Also, the efficiency of the battery inevitably decreases with time, no matter how well you treat the laptop.

While you can trust the estimates offered by computer companies, you should not rely on these.

When considering the battery life of the Dell XPS 13 vs MacBook Pro, keep in mind that Apple has advertised that the MacBook Pro provides users with 10 hours per charge. Dell, on the other hand, has advertised that the XPS 13 provides users with up to 19.75 hours per charge, though this number is dependent on users only using basic productivity applications like Microsoft Word or Excel.

Apple’s estimate for its MacBook Pro seems a little high if users stream lots of content. At the end of the day, both of the estimates offered for these two laptops indicate that these machines can be used for most of the day. If you plan on using applications that require a lot of processing power and RAM memory, then you can expect to experience a fraction of these estimates.

Our Final Thoughts on Dell XPS 13 vs MacBook Pro

​​​​​When examining the Dell XPS 13 vs the MacBook Pro, we think these are both reliable machines that customers will appreciate.

Ultimately, we think if touchscreen technology appeals to you in any way, and you don’t already have a tablet, then the Dell XPS 13 might be ideal for you. Before you purchase this device, make sure you test it out in a store. Just because you enjoy using the touchscreen on your smartphone doesn’t mean you’ll enjoy the same ability on your laptop.

We think the MacBook Pro appeals to users interested in a sleek, elegant, simple aesthetic. The MacBook Pro just feels different to some users, and that might have to do with its primarily metal body as opposed to the plastic that is featured in the Dell XPS 13.

Even beyond the materials that make up the body, many users express an ineffable love for all Apple products. If this applies to you, we suggest sticking with your gut and staying loyal to Apple, unless a certain feature on the Dell XPS 13 calls out to you.

If you want a hybrid laptop but want to stay loyal to Apple, the Touch Bar on the MacBook Pro might satisfy you, but it could also disappoint you depending on what laptop features you normally use. Your best option might be to buy a separate iPad tablet to complement your MacBook Pro.

The Best Mic for Streaming: The Top Models You Need

As a participant in the Amazon Services LLC Associates Program, this site may earn from qualifying purchases. We may also earn commissions on purchases from other retail websites.