Laptops are definitely what they were a few years ago.

They have evolved at the speed of light from the simple word processors to the more specialized machines they are today.

And no type of laptop commands as much attention as a gaming laptop.

This is not just because of their rugged beauty.

It’s more a matter of the power they possess.

And without that power, they can’t serve their purpose as gaming laptops.

The downside of gaming laptops is one compromise every gamer will have to accept – higher prices.

If you are looking for a powerful entry-level gaming rig that won’t burn a hole in your pocket, then you are in luck – I’ve just the rig for you.

Let’s take a closer look at what you can expect from this awesome machine.

The Dell Inspiron 15 7000 is a VR capable gaming laptop that is heavy in power but light on your pocket.

Especially if you are looking for a budget gaming laptop, you have to turn your eyes on this particular laptop.

I know words alone can’t describe the capabilities of this excellent laptop, so I’ll let the specifications paint the picture for you.

Those are some great specs for an entry-level gaming laptop, especially considering that it costs less than a grand.

If you don’t really get what all those figures and acronyms mean, let me quickly break it down for you. Then you’ll understand just why many gamers are hyped over this gaming laptop.

When it comes to gaming laptops, build quality matters a lot. The reason is simple – they go through more rigorous paces than any other laptops.

For many people, the term “budget gaming laptop” conjures up images of bulky laptops that weigh a ton and nostalgic feelings of aching shoulders after a short commute with one dangling on your shoulder. 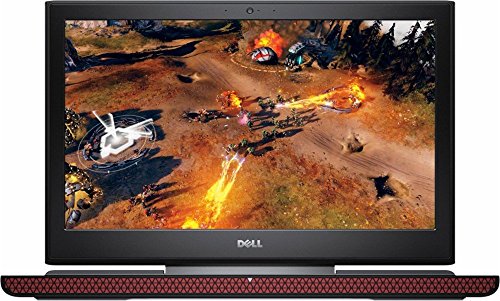 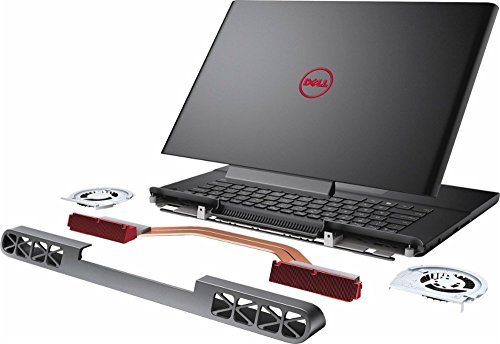 Well, the Dell Inspiron 15 7000 (or the Gaming 7000 as it is affectionately called by its fans) is nothing at all like that – it’s actually the opposite. 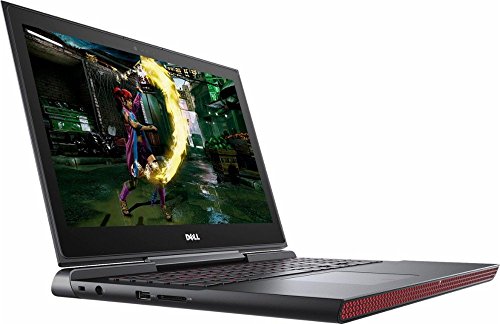 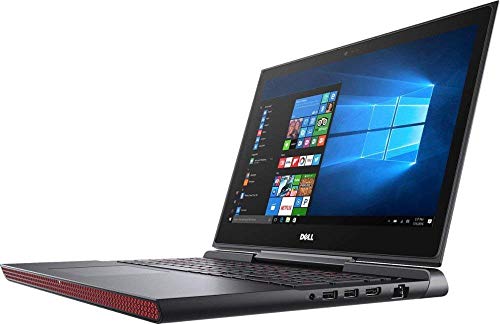 Although this is twice the weight of some normal laptops, it is a pretty decent weight for a gaming laptop as gaming laptops tend to come with more hardware, especially in the form of cooling fans.

At first glance, the Gaming 7000 will great you with the matte black-and-red design that most gaming laptops favor. It also sports a soft-touch lid bearing Dell's logo in an eye-popping red. 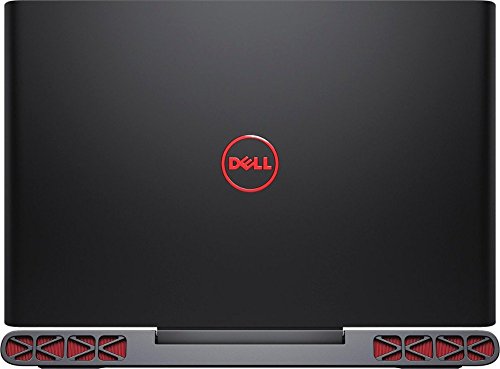 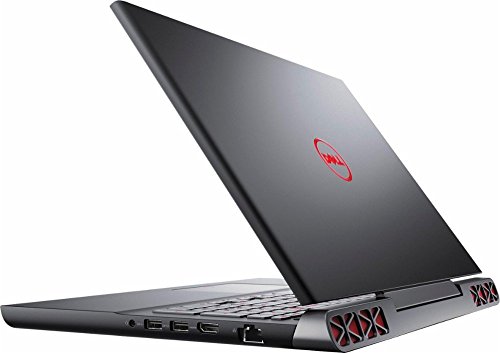 Dell could have done a better job with the rear as it features an unimaginative series of vents that come in straight, gray plastic lines. Nothing sporty or fancy as you would find in other aggressively designed gaming rigs.

In fact, the previous model was better looking in this respect.

Upon lifting the lid, the interior maintains the same motif with a nice black soft-touch deck, an island-style keyboard with red lettering and backlighting, and a touchpad surrounded by a nice crimson border. The power button in the upper left-hand corner doubles as a fingerprint reader. 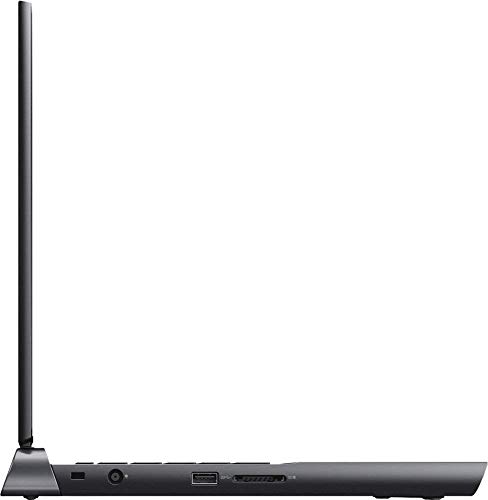 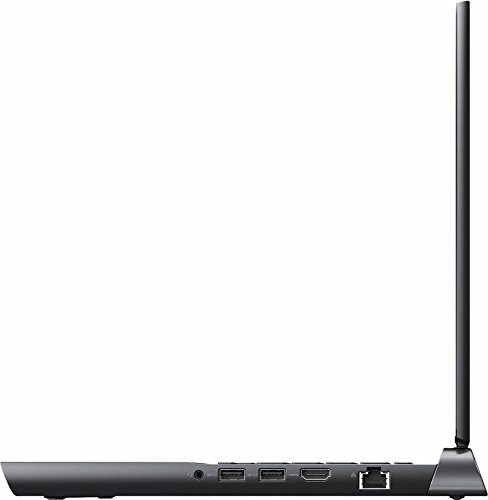 One thing you’ll definitely appreciate about the way the Dell Inspiron 15 7000 is built is that it has just about every port you'll need for your peripherals and monitors. The left side features a Noble lock slot, Ethernet jack, a USB 3.0 port and an SD card slot. On the right side, you’ll find a headphone jack, a pair of USB 3.0 ports, a Thunderbolt 3 port, and an HDMI output.

Dell deserves a decent 4/5 for the way they designed and built the Inspiron 15 7000.

If there’s one thing every gamer expects from their gaming rig, it’s exceptional performance. After all, most modern games are “heavy” and taxing on the average processor and GPU, and in some instances even unplayable.

How does the Dell fare when it comes to performance?

Pretty decent if I may say, but before we get to gaming performance, let’s first take a look at the display.

Dell’s first Inspiron 15 7000 had one major flaw – the display. Thankfully, Dell listened to the lamentations of their customer and did something about it.

It definitely isn’t the best screen around, but it’s decent enough considering the price of the laptop.

The biggest difference you will notice with the switch to an IPS screen is that it affords wider viewing angles and more accurate colors.

When tested, the Dell Inspiron 15 7000’s screen was found to cover 70 percent of the sRGB color gamut, not bad for a budget laptop, but still less than the mainstream average of 102 percent. Although it was poorer than the Acer Predator’s 81 percent score, the Dell performed better than the Lenovo Legion Y520’s 68 percent.

On the light meter, the Dell Inspiron's screen measured an average of 233 nits, sadly, dimmer than the average 253 nits but this time out-performing the Acer Predator’s 226 nits and trumping the Lenovo Legion’s 220 nits.

Overall, whether you are watching a movie or playing your favorite game, the new display is more pleasant to the eye than the previous model.

When it comes to budget laptops, one of the casualties to cost cuts is the audio system.

The Dell Inspiron 15 7000 is one budget laptop that actually gets the job done when it comes to giving you the sound that you need in order to enjoy your gaming experience.  The sound comes out with impressive clarity, with the bass doing a great job of making gunshots and explosions sound closer to the real thing and not a popping balloon.

And if all you want to use them for is listening to your favorite track as you work, they will still manage to feel the room with your sweet melodies (or hard beats, whichever sounds you go for).

Since you are looking for a gaming laptop, you’re probably wondering what kind of gaming experience you will get from the Dell Inspiron 15 7000.

In terms of gaming power, the Dell Inspiron 15 7000 comes equipped with an Nvidia GeForce GTX 1060 with Max-Q design and 6GB of VRAM.

If you are unfamiliar with Max-Q, it is quite an innovative technology that enables gaming laptops to run quieter, cooler, and shed a few pounds.

But the best part about Max-Q technology is that it allows gaming laptops to run more powerful processors without running the risk of overheating the system.

For a budget gaming laptop, that is pretty impressive.

In fact, that configuration is well able to provide you with plenty of power to play games at high settings. But if you want to get the best frame rates, you'll have to lower some games' settings.

Although it won’t give you the best VR experience, connecting your HTC Vive or Oculus Rift will certainly give you a taste of the wonderful world of VR gaming. This is something many budget gaming laptops can’t offer you.

When put to the SteamVR Performance test, the Dell Inspiron earned an admirable (for a budget gaming rig) 5.9, falling below the mainstream average of 6.1.

But when you use the Dell Inspiron 15 7000 for VR gaming, be prepared for increased fan activity (and noise).

This is one budget gaming laptop that will really give you exceptional gaming performance that will exceed your expectations – and the money you pay for it.

If you want your gaming rig to double as a daily workhorse, the Inspiron can easily handle your daily tasks. Equipped with a 2.5-GHz Intel Core i5-7300U CPU, 8GB of RAM, and a 256GB SSD the Dell Inspiron 15 7000 can easily multitask as well as any other performance laptop with the same configuration.

Opening as many as 30 tabs and streaming in HD won’t even slow down the system.

Overall, the Dell Inspiron 15 7000 is a versatile laptop that won’t just satisfy your gaming needs but will also help you complete your tasks quickly and efficiently.

One of the major weaknesses of gaming laptops is that they trade-off battery life for performance. The Dell Inspiron 15 7000 is cut from a different cloth.

The 7000 gaming has a battery that lasts an amazing 7 hours and 5 minutes with continuous web browsing. This is better than the mainstream average of 6:27 (which include less powerful laptops without discrete GPUs). In its class, only the Predator comes close with a battery life of 6:48. The ROG Strix and the Legion barely last half as long with battery lives of 3:32 and 3:39 respectively. 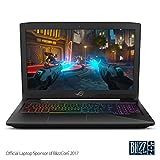 If there’s one plague gaming laptops seem to be eternally cursed with, its heat.

But because of the Max-Q, the Dell Inspiron 15 7000 manages to fight off this scourge pretty well as it can stay nice and cool under normal usage.

That makes it run cooler than the 95-degree comfort threshold.

But for the money, it’s probably the best gaming laptop you can buy.

From its improved display to its enhanced GPU, the Dell Inspiron 15 7000 is one gaming laptop that won’t bring any regrets as part of the package.

If you are looking for a gaming laptop for under $1000.00, this one comes highly recommended.