Getting a budget laptop can be quite a frightening undertaking.

I know frightening is a strong word, but if you are like me, buying a lemon is something I utterly loathe.

And it’s not just because of the financial implications, but because buying a lemon ultimately costs a lot more in the end – time-wise that is.

And that is why whenever I look for a laptop, I research the best value that money can get me – and I watch out for brands that have the potential of trying to get me to make lemon juice.

And that’s why you should strongly consider a Toshiba Satellite.

Toshiba has been in the consumer electronics game for a long time and they have perfected the science of balancing performance, quality, and price.

If you are confused by the myriad of budget laptops on the market and are wondering which brand and model you should invest in, then sit back, relax, and enjoy this Toshiba Satellite review. You just might fall in love with this nifty piece of innovation.

Let me quickly show you 3 Toshiba Satellite models that will definitely impress you (and your mates) but won’t break the bank.

One point I need to mention is that Toshiba has moved away from making consumer laptops in order to focus on enterprise systems. That is why you will find that these laptops are a bit hard to come by. And when you do come upon one, don’t hesitate to pick it up.

The Toshiba Satellite Radius – Convertible with a Difference

But soon, a niche opened up for budget convertibles, and every laptop manufacturer was trying to get a piece of the pie.

And to be honest, a few of them do make pretty decent convertibles for the ordinary Joe.

But that’s where the Toshiba Satellite Radius sets itself apart.

The Toshiba Satellite Radius is a well-built convertible that offers you enough juice to make some power moves other 2-in-1’s in its category can only dream of.

Let’s take a look at some of its specifications so that you can see exactly what I mean.

For a convertible laptop, the Toshiba Satellite Radius carries more power than most of its competitors.

Sporting a big screen and only weighing 4.5 pounds, the Toshiba Satellite is one laptop you’ll have no trouble commuting with. It hits the sweet spot when it comes to size for convertibles.

Looking at the Toshiba Satellite Radius, you won’t really get the wow factor at first. Featuring a matte black plastic chassis with a subtle brushed texture, it looks just like any other laptop.

That’s until you lift the lid.

Under the hood, you’ll definitely be wowed by the big screen that can rotate 360-degrees, transforming the laptop into a tablet. And the hinge is one of the strongest you will ever find on a convertible laptop.

You’ll also find a premium feeling metal deck with brushed finished that, unfortunately, might be a tad small for people with big hands. From front to back, the keypad on the Radius is a mere 10mm, 2mm shorter than conventional keyboards.

Other than that, under the lid, the Toshiba Satellite Radius certainly does have an appealing look.

But how does it perform when put to the task? Let’s take a look, shall we? 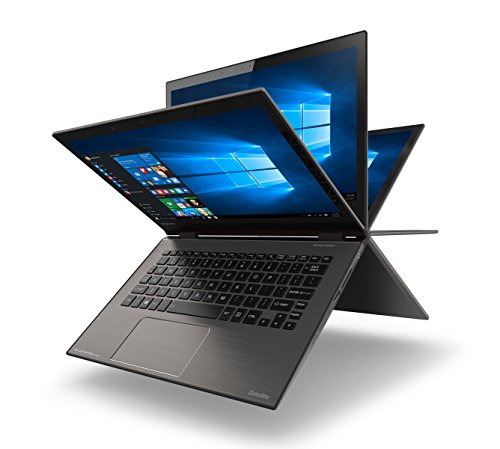 Sporting a 2.1-GHz Intel Core i3 5015U CPU, 6GB of RAM and a 500GB hard drive, the Toshiba Satellite Radius is very much able to handle all your everyday needs, such as surfing the Net or streaming high-definition movies - with multiple tabs open.

The Toshiba Satellite Radius performed surprisingly well without slowing down.

When put through the Geekbench paces, the Radius scored an impressive 4,415, making it faster than other convertibles kitted with the same i3 processors, like the Asus Transformer Flip TP300 (3,992) and the HP Pavilion x360 13t (4,231).

And quite surprisingly, the Toshiba Satellite Radius came in just slightly behind Lenovo’s Edge 15 (4,722) which is equipped with a more powerful Intel Core i5 processor.

As for file transfer rate, the Radius' 500GB 5400 rpm hard drive also impressed with its transfer rate of 29.9 MBps. Although not something really amazing, it definitely is a bit faster than similarly priced laptops. And quite surprisingly, in this round, the Toshiba Satellite outperformed the more powerful Lenovo Edge 15 whose transfer rate is 23.10 MBps.

When tasked with matching 20,000 names and addresses in OpenOffice, the Toshiba satellite Radius completed the task in 6 minutes and 31 seconds. Again, beating the Asus TP300 which completed the task in 7:15, about the same as the HP Pavilion x360 13t's 6:28, and this time slightly trailed behind the i5-powered Lenovo Edge 15's 5:07.

If you are a gamer though, don’t expect much from this laptop as it definitely wasn’t built for gaming, especially modern games that require powerful dedicated graphics cards.

As for battery life, the Toshiba Satellite Radius can give you more than 6 hours of battery life, making it one of the best workhorses to take with you if you want to get some work done while away from a power source.

These are very impressive stats for an entry-level laptop that costs less than $650.

Let’s now take a look at the display. It certainly has received a lot of flak from many reviewers, but is it that bad?

The Truth About the Display

Unfortunately, this is the Toshiba Satellite Radius’ weakness.

The Toshiba Satellite Radius’ 1366 x 768 display is a bit lackluster due to its weak color range and mediocre brightness. As for viewing angles, let’s just say Toshiba could have done a better job here as moving out of the screen’s “Goldilocks zone” causes the colors to shift significantly.

When tested, the Radius’ screen recreated just about 64.2 percent of the sRGB spectrum. This is pretty decent for a budget laptop, especially since it outperformed the better equipped Lenovo Edge 15 (58), and it was about the same as the HP x360 13t (64).

It’s true, 1080p video won’t look as sharp on this screen, but considering the price and other excellent features, it’s pretty easy to overlook the screen’s shortcomings.

Should you get the Toshiba Satellite Radius?

If you are looking for a budget convertible laptop, it’s simple – go ahead and get the Toshiba Satellite Radius.

But this is not the only Toshiba Satellite in Toshiba’s stable.

There’s also the Toshiba Satellite P55t if you are looking for a laptop with more power.

The Toshiba Satellite P55t was built to compete against the MacBook Pro, and that says a lot.

When it was first launched (in 2015) it received rave reviews for many of its class-topping features such as its 4K display (one of the first laptops to implement 4K), superior build quality, and… well, let’s just take it one step at a time and see what all the hype is about regarding this class-leading laptop.

But first, the specifications.

The Toshiba Satellite P55t is actually a notebook made for power users as you can tell for from the specs below.

As you can see just by looking at the specs, this is one monster of a notebook. But if that isn’t too obvious, let me highlight a few things you’ll definitely appreciate about this amazing laptop. 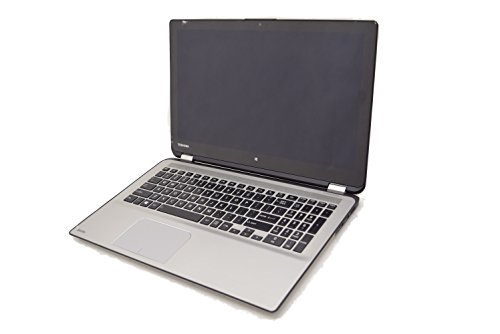 As you can tell right off the bat, the P55t is bound to impress, especially since it comes sporting an Intel Core i7-4720HQ quad-core processor that clocks at 2.6GHz (a turbo function boosts this to 3.6GHz).

The Intel Core i7 quad-core processor coupled with the laptop’s massive 2TB hard drive certainly make for a faster than average notebook that will help you complete most of your tasks in record time.

But let’s get to what the satellite P55t was basically created for – content.

If you do a lot of content consumption or creation, you’ll definitely fall in love with the Toshiba Satellite P55t, especially as it comes with Adobe Photoshop Lightroom 5 straight out of the box.

And true to its claims, the 15.6-inch display’s 4K Ultra HD is as true to life as a display can be, making all your video editing and watching an experience well worth the price.

As for gaming, the P55t comes with a dedicated AMD Radeon R9 M265X graphics card that makes it a capable gaming machine.

The bottom line is that if you are a power user looking for a laptop to match your lifestyle, the Toshiba Satellite P55t is one machine that can handle basically any software you throw at it – and that quite well.

Toshiba went all out on the P55t in many areas, one of which is connectivity.

While most notebooks save on space by cutting the number of USB ports they come with, Toshiba broke the norm by equipping the P55t with 4 USB ports, and all of them USB 3.0. This is truly a bonus if you need to transfer a lot of files without having to struggle with low bandwidth.

The Toshiba Satellite P55t also comes with HDMI out that has 4K UHD capability, Gigabit Ethernet (RJ-45), Intel dual-band AC WiFi, and Bluetooth 4.0 that works out of the box.

And as a caveat, the P55t comes with a Blu-Ray burner.

One aspect in which the Toshiba Satellite P55t falls short of the MacBook is in its appearance.

Even though it comes with a brushed aluminum finish and chrome-lined click-pad, it fails to impress as it looks just like any other Toshiba Satellite laptop.

But once you open the lid, you’ll find a pleasant surprise in the form of a frameless LED backlit keyboard, and one of the best ergonomics-wise too.

Although the Toshiba Satellite P55t doesn’t have a wow factor when you look at it from the outside, its inner beauty definitely outshines that.

With the Toshiba Satellite laptops, you won’t go wrong as you will be investing in well-trusted Japanese craftsmanship and reliability.

You will be hard-pressed to find such great value for money in any other laptop brands.

So go ahead, if you are on the hunt for a new laptop, give the Toshiba Satellite laptops a “look-see”.