From its jaw-droppingly gorgeous 4K display to its powerful hardware and elegant design, the Dell XPS 13 9370 is the belle of the ball when it comes to Dell’s new and improved 2018 laptop lineup. With a robust lineup of internal hardware, featuring a hefty integrated GPU, a powerful new Intel processor, and a crystal-clear nearly bevel-less 4K display (with optional 180p mode), this ultrabook almost passes as a gaming laptop.

Moreover, in 1080 mode, the battery get a better-than-average performance at 12 hours per charge, and the ultra-portable mini giant offers a design that is elegant, slim, trim, and powerful at just 2.65 pounds and 0.46 inches thick. However the 4K model will set you back about $1700 to $1800 from the Amazon, and there are many more powerful laptops at that price range.

Plus, in the 4K mode, the battery drops to 8 hours, and there are no USB type-A ports to support legacy peripherals. It is difficult to imagine many gamers squinting at a 13.3-in screen (no matter how pixel-rich) in the middle of all the online action.

Nevertheless, this is a super sexy offering may be the closest Dell has even been to matching the power and elegance of the mighty Apple fleet of highly used and loved hardware, and it is also certainly a contender for the best ultra-thin laptop of 2019.

One look at the Dell XPS 13 9360 and 9370 line will tell you who Dell is taking aim at with their design. The price point, too, indicates the XPS 13 is made in the likeness of Apple’s MacBook Pro, which is a trend that has not been uncommon over the years (more on this below).

Moreover, words to describe the XPS 13 9370 like “refined,” “enlightened,” and “empowering” are usually reserved for machinery that is designed in Cupertino, California. And the Alpine White and gold design option for the XPS does look very Mac-like from a distance. However, Dell’s new offering, with near-bevel-less features, may offer some things that even the mighty MacBook does not. 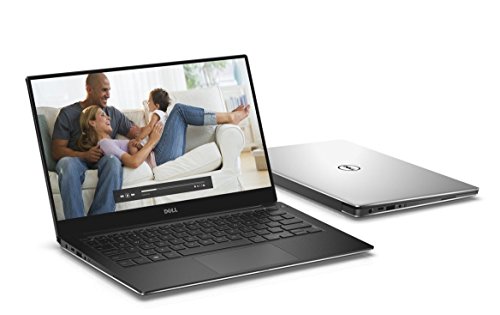 There are similarities too, such as both laptops supporting USB-C (Thunderbolt) over USB-type A. We did note, however, that the XPS also offers a microSD card slot, which we like a lot. Still, it is a bit like comparing apple and oranges, as the chipsets and OSs are notoriously difficult to match up (though we did trace the XPS to the Intel 620 chipset and the Mac to the 640 and 650 version), and the MacBook Pro can make a perfectly good gaming and video editing unit (more on this below). 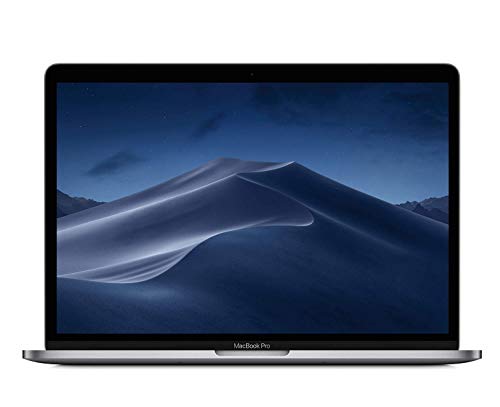 However, it is nice to know there is life out there beyond the MacBook line and that displays on the PC side can be just as bright and vibrant as the ones from Apple. Still, unable to escape the comparison, part of the XPS’s appeal comes from its newly available white and gold color scheme, although the tradition grey and black is still available as well. And, from a distance, the clean lines elegant details look very Mac-like, indeed. 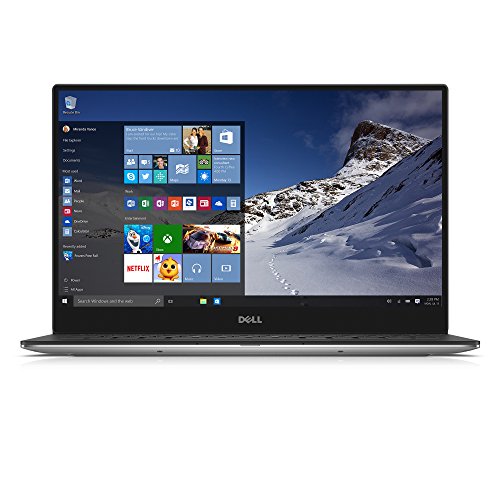 The model we are writing about has a lid and bottom made from gold-colored aluminum, while the deck and sides are comprised of woven crystalline silica fibers, which feels and looks as sophisticated as brushed titanium and adds to its lightweight and sleek aesthetic.

But the new XPS is about more than just looks, and, along with a beefy processor and one of the best laptop displays on the market, you will also get a better webcam and a new and improved cooling system that promises longer sustained performance.

However, as a compromise, Dell had to ditch to the better battery in the previous version of the laptop line, and replace it with 60W integrated version. Still, the new XPS sports a battery gauge with lighted diodes that still performs better than some of the other PC’s in its weight, like the HP's Spectre 13 and Lenovo ThinkPad X1 Carbon.

Also, in dropping the USB-A slots, the XPS gain two Thunderbolt 3 ports, which can be used to charge the laptop or to connect high-speed peripherals. Although there is now no legacy support, it was a necessary event in order to maintain the slim design. One of the other major benefits of going with new Thunderbolt 3 ports is their included support for four-lane PCI connections, which allow for the use of eGPU's, transforming the XPS into a serious gaming machine.

Moreover, the 13.3-inch, Infinity Edge technology introduces some of the thinnest lines in the ultra-light laptop game, and the 3840 x 2160 (4K, Ultra HD) touchscreen actually feels bigger than it is as a result, boasting an impressive brightness, sharpness, and color-quality that is unmatched in 13-in ultrathin machines. According to techradar, the 4k display hit 130 percent of the sRGB color gamut (a bench test), while the ThinkPad X1 Carbon hit 104 and the Spectre 13 hit 111 percent.

Audio and Keyboard on the New XPS 13

Moving on to audio, the XPS 13 9370 boasts side-mounted speakers that produce loud, clear sound, though it is not sound that is as rich as it could be, and some complain that the percussion sound a little tinny. Although there are a few sound tools that Dell includes to allow you to mess around with the sound a bit, none of them seem to help much. We will note, though, that the sound from the XPS was louder than most laptops twice its size.

Moreover, the keyboard feels solid, though the keys are shallow and don’t feel as they depress completely due to the thinness of the ultrabook, however, typing is a breeze once you get used to the different feel. Also, the trackpad is refined and accurate, responsively allowing for easy navigation of the laptop OS (Windows 10) and its apps. 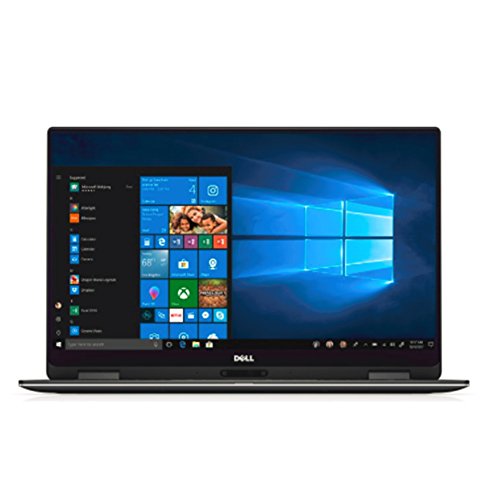 And, thanks to our friends at TechRadar, we also found that, although the XPS is rated only for light gaming, you can lean pretty heavily on the new Core i7 thanks to dual fans, a proprietary thermal insulation, and dual heat pipes. Moreover, the XPS 9370 blew threw video transcoding tasks, and the 1TB PCIe SSD accepted almost 5GB of media in 13 seconds for the fastest rate in its class.

However, the Dell XPS 13 9370 generates its stunning 4K graphics using only an integrated Intel UHD 620 GPU, which is not recommended for gaming an or heavy graphics or video editing (you’ll need a decent e-GPU for that). Though testers did find that the XPS did ok with light video editing and playing some games at their lowest settings.

Handing most normal everyday tasks like streaming videos, word processing, and surfing the web produced snappy results and the processor stayed pleasantly cool and well in the range of acceptable heat. Also, compared to the HP Spectre 13, the battery last between two to four times longer. 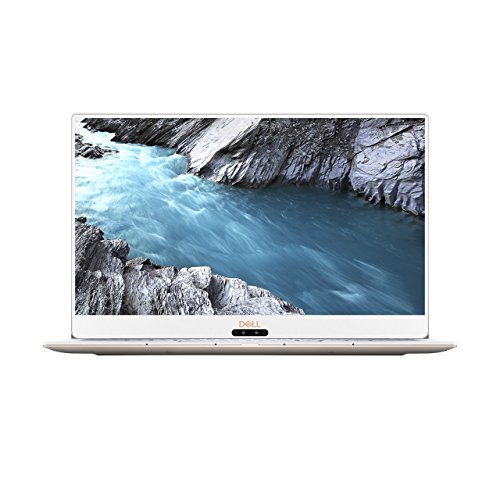 All in all, everything is pretty positive for the new XPS 13; however, in their quest to invent a near bezel-less laptop display, Dell chose to move the webcam from the lower left corner of the bezel (an odd place to begin with) to the center bottom, instead of keeping it on top of the display, as most laptops do.

The result is what many refer to affectionately as the "nose cam" because of the fact that looks up at you no matter how the display is angled. And though the nickname is laughable, it is not the type of polished technology you would expect to find on a $2000 laptop. It seems Dell has had a history of making these kinds of assumptions and then rushing to the finish line of release day without first vetting the concept.

Some reviewers may say that this comes part and parcel with being America's second-largest PC vendor, but, with Dell, it seems like more of a trend than a misstep. And when Dell's tablet-laptop combo premiered in 2010, the public and media were abuzz about its potential duality, varied uses, and functionality.

The trouble was that when it was released, the 10.1-inch tablet was flimsy and came with a laughable battery and a price that punched far above its weight class. Needless to say, the Inspiron Duo had a short run.

Also, remember the DJ Ditty? Neither do most people. But this supposed “iPod Shuffle killer” was built as Dell’s response to the wildly successful Apple media consuming product and featured a 5GB of memory and an FM radio. Unfortunately, with no retail channels or media distribution chains, the Ditty went the way of the Dodo in 2006.

Next up, the Adamo was a hyped-up elegant, attractive, ultra-slim laptop with a giant screen and a portability to rival the MacBook Air. What consumers got was an anemic 1.3-GHz processor, a machine that could not be upgraded. The line was killed in 2011.

Dell is obviously hoping for a better outcome with the XPS 13 line, and, for the most part, the offering seems to have some legs. For one, it is elegant as heck, and, two, it comes in several configurations of with prices ranging from $1000 to over $2,000.

The bottom line here is that the Dell XPS 13 is a series of beautiful machines inside and out that has yet to find its identity, which may have been the downfall of the Dell Streak 5 and its smartphone venture in 2012. Of course, ultrabooks are all the rage now, and the XPS 13 9370 is armed to the teeth with great gear and a great looks.

However, the new XPS is in prime gaming laptop range, and you can’t play graphically intense games or perform aggressive graphics edits on it without attaching an addition eGPU via Thunderbolt. It is sort of the Achilles’ heel of this laptop – on the one hand, the stellar 4K graphic would make it an awesome gaming machine, but, on the other, it can’t quite get there on its own. 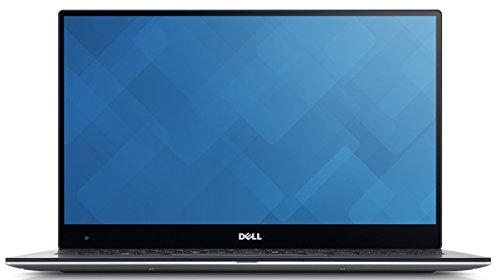 Moreover, it is far too expensive and pretty to be a family movie-streaming machine and doesn’t quite reach the MacBook Pro’s level of overall versatility (graphics editing, streaming, gaming, etc.). We also still have questions about that new heat system when the machine is put through the ringer. So, where does this elegant beast fit in?

We are not sure what the answer is. Hopefully, Dell has a plan because we’d hate to see this gorgeous design become the computer maker’s next short run.